I don’t think I’ve introduced you to our alley garden yet. It was a bit of a nightmare when I moved in five years ago this month!  The “garden” was full of junk, grass, weeds and dead trees – and who could forget the chain link fence, shabby garage roof and bad paint job!

Every year we seem to improve the garden a little more – with the exception of the “setback” we had a couple years ago. 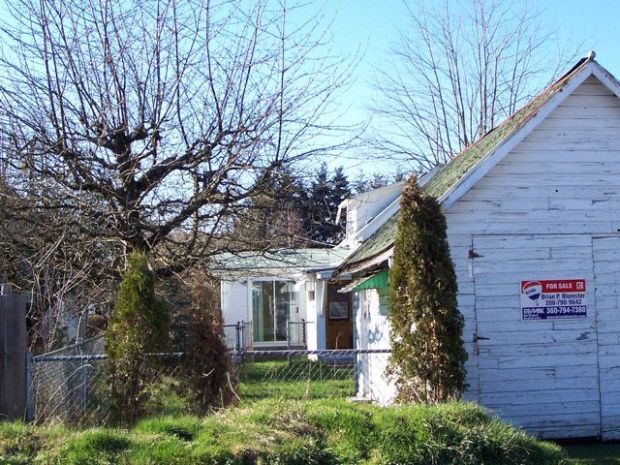 BEFORE: Back Alley Garden

BEFORE: Alley Parking Spot & Garage (back of house & future veggie garden is beyond)

A couple years ago the alley garden was filled with Dahlias and other blooming perennials until I got tired of people stealing, damaging and driving over the plants! Yes, they still drive over them – even with the large stones we added.  Initially I was going to fill the bed with traps and sharp objects but decided against it.  Instead, I punished EVERYONE and removed all blooming perennials except the Irises.  They seem to hold their own against the vandals and bounce right back if driven over.

I added a Smoke Bush, Lavendar and a couple Elephant Ears to fill the void.  They look nice but it just isn’t the same.

Since this is an East facing garden, it gets plenty of sunshine. This year I plan to move a couple plants into the front perennial garden and replace them with a couple huge Elephant Ears and an Agave I recently purchased.  I want this garden to look showy again since I’m not super thrilled with how bare it looked last year (picture below).

I’ll keep you updated on the progress and promise to share this garden more often. Around the corner and along the parking spot is also where I grow our raspberries and blueberries.