My two Silkie hens appear to be sharing the egg laying duty. One will lay an egg daily for a couple weeks, while the other doesn’t lay any.  Then they trade. I almost never get two eggs a day.  Then again, I hear that Silkies aren’t known to be great egg layers.  I love them just the same.

Now that it’s getting dark early they have a lamp with a regular bulb that comes on from dusk to 10 p.m.  This is supposed to keep them laying eggs during the winter months.  So far it appears to be working since we’re still getting eggs (one a day).  Then, since the last couple of nights have been so cold (upper 20’s), I replaced the regular bulb with the red heat lamp so they’ll stay warm. 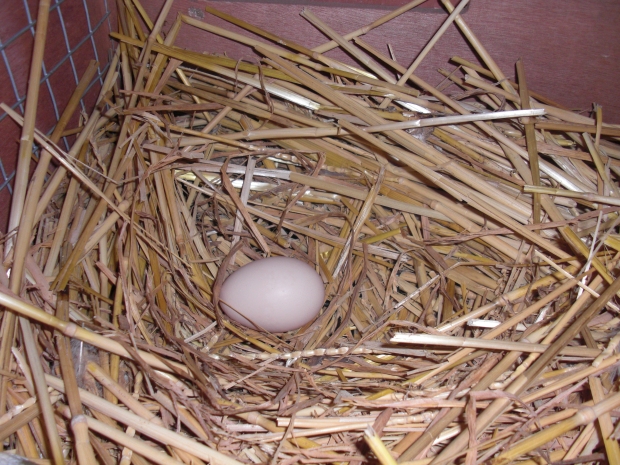 Since I’m already talking about my chickens.  I’m  happy to report that Brownie is getting along with his two hens and the four pheasant in his run at my mom’s (being good keeps him out of the soup pot). In case you didn’t know, I had to take Brownie to my mom’s this past weekend because of his crowing.  You can read more about him here.

Because we only have one rooster now, Buttercup,  Hazel and Henny Penny are more active in the coop and in the garden.  This is a huge relief.  Buttercup is still being a good city rooster. He only crows one or two times daily and it’s much later in the morning and not as loud as Brownie.

My original plan was to have four hens (not two hens and two roosters), so I’m already thinking about getting a couple more in the spring. I’m not sure if they’ll be Silkies or Polish hens. Thoughts?